For any who have ready my blog across the long term, you will now that one of my favorite events in any calendar year is the Astronomi-Con Tournament Series. This is a set of tournaments that  has hosted events in several north american cities for many years now (since 2001). At the toronto event I have played against Phil Kelly, chatted with some of the best players in North America, made a ton of friends (an enemies mwuhahahaha) and have played some of the coolest scenarios on the nicest boards you will find anywhere!!! This year the Toronto event is scheduled for July 20th and 21st.

"But James... what is Astro? And Why do you like it so much? " (Ok that was cheesy but I am mid way through a move at end of semester and have had minimal sleep for 2 weeks now.... so deal with it ;P )

Billed as "A tournament for people who dont like tournaments...." Astro strives for 3 goals: 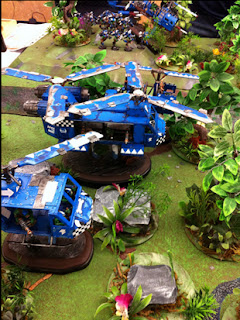 Both organizers were long time tournament players and had ‘seen the elephant’ at local, regional and national tournaments such as Games Workshop’s Grand Tournaments. Many elements of Astronomi-con are drawn from the best of those experiences, while others are designed expressly to prevent some of the negative things that cropped up. A major part of this was having scenarios that were exciting and unusual so as to give the players games that were not only a new challenge for their tactical skill but also provided great stories from their games. In many ways, Astronomi-con is a tournament that doesn’t act like one.
You’ll see special characters, flyers, VDR creations and scenarios totally unique to Astronomi-con.


#2) Make the scoring system transparent and as non-subjective as possible.Many tournaments have had so many subjective scoring points that the judges or organizers wind up effectively picking the winners. This was felt to be open to abuse as well as very hard for an attendee to understand. With that in mind, Appearance, Composition, Army list scoring and indeed as much of a player’s score as possibly could be, is totally determined by the players themselves. Every player should go into the tournament knowing exactly what their army Composition score is and within a few points what they’d get for Appearance as well. Awards like Best Army are decided not by the organizers, but by the other players. The scores are pure math and tables. There is virtually no bias possible in the system. 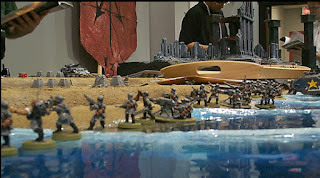 #3) Give folks a chance to meet and play with other like minded folks.
This was always an aspect of the tournament but started off as more of a subconscious desire – evolving into a real element of community. Over the years, each Astronomi-con event has developed into its own micro gaming community. People that live thousands of miles apart have become friends at Astronomi-con and now fly from all over North America, as much to visit their friends as to play great games.
They’ve recently begun to develop this aspect of the community further with organized post-tournament dinners.  The social aspect is alive in its own right, we’re just helping it along and making sure new attendees are comfortable and feel part of the community

What can you expect?
6 games over 2 days (3/day), played at 1500 points. One Force Org chart. Special characters, Forgeworld and flyers, VDR and specialty armies are all welcome. Some with a few provisions – check their rules section – but they aim to try and allow as much as they can so as to enable players to experience as much of the 40k universe as they can manage. 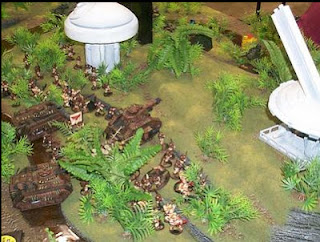 Variety! Every table is different. Each with its own scenario and objectives. You might find yourself fighting in howling blizzards, steaming jungles, shattered cities, anything is possible. Keep your army as flexible as you can because, just as in real warfare, you can never know what your force will be called upon to do. Killing the enemy might be a viable road to victory – or totally unimportant. You may need to take and hold ground, capture an individual or supplies – the possibilities are wide and varied. Expect the unexpected! 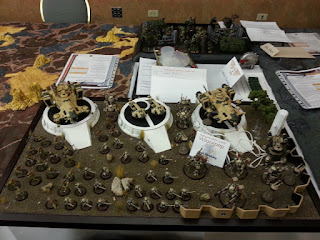 Hop on over to their website http://astronomiconportal.wordpress.com/ and see if there are still any spots left. Tell them I sent you - it wont get you a discount, but I seriously consider a lot of these people my friends and it will create much good will towards you......  Even if you arent going to play, check out the photos they post (astro draws some incredible armies and sets them to battle on beautiful tables) and join the online community - one of the most well versed and reasonably minded 40k communities anywhere on the web.


Bottom line: This is a super FUN series of COMPETITIVE and CHALLENGING events which has generated a truly EXCEPTIONAL COMMUNITY of people to be involved with.

Cya in a week with some warmahordes stuff......
Posted by TKKultist at 8:30 am

I got to attend the Winnipeg con and after adjusting to their scenarios and play styles. I had a blast and will be returning for more!