With the wall and floor established and an antagonist/protagonist relationship realized it was important to address the room "décor" that will tell the rest of the story and provide supporting information about the characters and events. 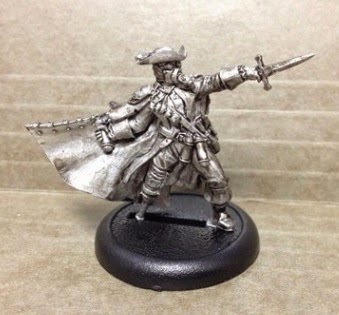 Gorman is an alchemist whose abilities in game are basically defined by his grenades rather than his swordsmanship. If we look at the figure this is also clearly on display where the blade is held up defensively to keep opponents at bay while his right arm is flung back in preparation to throw, causing the cape to wave dramatically and revealing the arsenal slung on his belt. The grenades are the real threat and the basis of the stance of the model.
In the game, Gorman carries smoke bombs, impractical here as he is making his presence clearly known (not hiding), bombs which create instant rust and the dreaded blinding black oil. The use and effects of both of these could definitely be incorporated into the scene with clever use of paint and a few fun tricks. Used correctly they should also add a sense of power and gravitas to our protagonist.

Having conceptually established the criminals as being dangerous and well equipped, it made sense to include a light warjack in their personal armory - certainly useful in most aspects of their shady daily business. Having a firepower heavy warjack in a warehouse full of goods and at close quarters seemed less than completely sensible so I grabbed a Talon (mercenary light warjack) armed with a Stun spear and boasting a shield it seemed to make a great logical bodyguard/enforcer/labor 'jack.

It was also a target that Gorman could believably shut down in his own special way.
SO:  How to wreck a Warjack in a believable Gorman-esque fashion.
﻿﻿﻿

This warjack would have to be defeated by alchemical process moreso than by brute violence - so it shoud remain realtively intact. The damage and manner of its defeat would be evident in the paint and finish rather than in heavy modification.  I took some time to monkey around with the pose and in the end did a little bit of cutting and pinning to lay this big guy down. I wanted the lines of his body to draw attention in the same direction as the action of the scene so that he became a dynamic compositional element rather than just a piece of scenery or a major character in and of itself. Using the paint to tie its colors into those of the criminals and using additional paint effects to make this defeated wreck harmonious with the overall environment were also very important - but we will come to this in the next installment ;P (ooh a hook!)

With a bit of work on detailing (strip styrene, granst line rivits, watch parts, brass and wire) and hinging the door to fit it was time to move into primer and finalize the little details for the piece. It was at this point that I nearly made a very costly error. I added alight by the door which looked super cool, but I did so without consideration that it was a GW brand part and that it would be against the rules of the competition. This would come back to haunt me later, but would also give me an opportunity to do something even cooler......

For priming I tried Vallejo's Black Airbrushable primer  that I borrowed from my buddy Erik, with an overspray of Ammo Of Mig Jimenez Grey Primer. I REALLY prefer the finish of the Ammo brand primer and ﻿﻿
will be picking up their black instead for future work. (you think I would know by now just to default to this stuff in the first place but In the moment I am super glad that Erik had the black to lend me either way!)

Note the extra light being suggested around the lower window and coming from through the doorway as well as directly under the thrice acccursed lamp..... Now the painting was really ready to begin!

Cya next time to show you some really cool paint tricks!
James