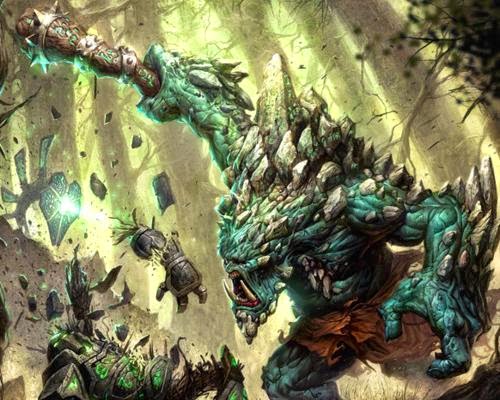 So I don't normally share my competition entries before an event but this time I am just having too much fun not to share!

I love trolls and I really love Mulg - in spirit, in rules in fluff (The NQ article on him from a  few years back was amazing!).

For those interested here is a great article about using Mulg on HandCannon Online!


As to the model...... well he is better looking than the mercenary Nyss hunters... but thats a pretty low bar to set (and I think I have finally come up with a good and playable answer for that as well......and yes I will share that here once it works its way through my to do que!)
Mulg is simply too small by contemporary trollblood standards. His legs are puny in a way that no amount of crazy swirling cloth can hide and his head is puny - even smaller than a standard plastic blitzer/mauler/bomber.  I want to love Mulg but in all honestly I cant even begin to convince myself to field him in his current form.

For a long time I looked at other people's attempts to rectify the Mulg conundrum by reworking the extreme dire troll - which size wise was much better. My biggest problem was that with few exceptions - people seemed to miss some of the design cues that defined Mulg. Basically they fixed the proportions but lost a lot of the best parts of the mulg model along the way. Plus more than a few of them really exceeded the technical rules for inclusion in events (though admittedly I aim to follow the rule of cool first and foremost AND have never heard of an extreme Mulg being turned away, nor would I ever) BUT if I am going to go to all this trouble, it might be nice to be able to take him with some surety to an event should I so desire.

And then Dozer and Smig were released.

What a glorious beefy set of legs on that troll - the shoulders, the head - just awesome. Just Right. Hands are debatable - I think they look super cool but I know some people just roll their eyes at that part of the proportioning with fair reason.  All that being said, I knew that I had finally found my answer. A true hybrid of 3 kits. Aiming for tourney legal. Clearly Mulg in design and form - just more Mulg..... Mega Mulg!

Taking my dozer model to the ban saw and slicing the top half of the torso away from the legs (Fun fact - large hollow pockets inside of this guy make sawing easier than you might think!!). I also sliced away both shoulders so that I could use them as well. This has left me with a mostly useless center of a torso, but I figure I can resculpt it a bit and use some of the extra parts from my heavy Beast box I may yet be able to make a whole additional blitzer or somesuch out of it. We shall see.....

Meanwhile I also sliced up Mulg's shoulders ever so slightly so that I could marry the dozer shoulders to either side of the full Mulg chest back and torso segment. I pinned Mulg's actual arms to the dozer shoulders and they lined up in really good ways. This means that Virtually the entire upper half of this model is Genuine Mulg Parts - and should meet the PP guidelines for conversion!

I took the pouches and such off of dozer's legs and drilled a big pin into the center to join the upper torso and the legs together. As you can see in the pictures I often use large paperclips as my pinning material - cheap, easy to cut and plenty strong. That being said I did still double pin the arms because they were such large hunks of metal to marry to the resin/plastic I figured it was better to put extra work in at this stage than to worry about material fatigue and "slouching" later... I also wanted to give him every bit of height available to have him appear truly monstrous on the table (as is befitting the greatest of all trolls) So I took the Extreme Mauler's Base and gave it to him as well.
Here is the progress:

Yeah - Looks pretty cool but it isn't enough to give a sense of scale so, this is how MEGA big he is....

Ok I know the behemoth isn't really as big as it should be either, but it is still a pretty darn big warjack model as is.  Even without the base Mega Mulg is taller...... ;)

And next to a mauler... just for fun!

So - it is time to figure out the head and to get out the sculpting putties for our next steps....More pics to come as the build progresses!
Posted by TKKultist at 8:00 am