Man that is a pretty obnoxious title... sorry.

Anyhoo the task of converting and personalizing my Trollbloods continues! As mentioned last time I have 2 units of fire eaters and I dislike duplication in my models. My first unit were pretty standard - just a couple of tweaks in terms of magnetizing, a couple greenstuff details and a simple head swap.

This unit will be a little more..... creative?  I am still going to strive to make models that I can play with in most events. Stuff that is still easily identifiable because it contains the key design features of fire eaters, is built mostly of PP parts (rather than being largely sculpted) and which makes use of  iconic fire eater parts from the original kits.  Will they be allowed everywhere/all the time. There is a chance the answer is no - but I have been making models long enough that I feel I've got a solid handle on how far I can push the "rule of cool" envelope and still make something work.... gotta admit I'm gonna push the boundaries on this one more than a bit though ;P

Lets get to it then!

The first Fire Eater conversion uses several key iconic elements from the Fire eater kit - namely the billowing fire, arms and the head with the spitting/blowing face.
The fire eaters are a warrior unit second and trollblood entertainers first. I felt that these models could do with a little bit of extra flashiness and in that vein I used a warder body because I liked the little bit of extra "bling" in the armor details. If you look, the leg armor really echoes the Fire eater wrist bracers nicely.

I made the torch handle out of Greenstuff and a brass pin and just shaved out the insides of the fingers a bit so that I could bend them to appear as though they are actually holding the torch. I also added a big flashy cape - in fact I have to think this is the biggest and flashiest cape I the game (iron mother may disagree but meh) and this one was taken from the Khadorian Dark Prince himself - Vlad. I painted a vlad model for a friend some time ago and made a less giant and silly looking cape of greenstuff so I had this one in my bits box.   I think it suits this model in a lot of ways - style/flashiness, size (much better than on the puny prince) and it really enhances the visual movement -  helping to accentuate the pose and posture of this character. I recut the angles at which the shoulders met the body, filled the gaps with Greenstuff sleeves and created an ostentatious fur collar that both blends the cape into the figure and again echoes other models in the army, including Borka and the other Fire eaters. I even added a big gold (well green right now) chain to the front as a sign of wealth and showmanship. 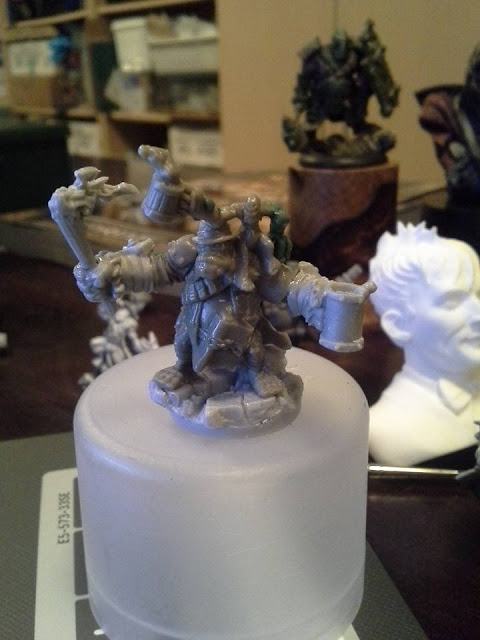 The second model of the unit was something a little different - but one I am really pleased with!

For the Pyg in this unit I decided to raid my copy of Iron Kingdoms Unleashed. This bowler wearing pyg is the thing that sold me on ordering the box in the first place and while it is a great game, it is not one I get to play often. It seemed a shame that this cool character would just sit in a box waiting for someone to recue him. Clearly he should be marching along side his super cool Kin in my army!

So after I shocked the soft plastic to harden it somewhat, I cut off his hands and added actual fire eater hands in their place. This gave him the obligatory torch as well as a great big stein that echoes his little friend's drink nicely/ I also re-carved a few details - like the hatchet head at his waist - so that the 3d detail looked appropriate instead of merging into the sculpture. I also used greenstuff to remake the weedy little arm on one side of the whelp and to add rocky bumps on other areas. A new base and it is hard to believe that this model was ever armed any differently! With the torch, booze, fancy hat and a mini keg he makes a great Fire eater!

The last of my eaters still has some putty drying and a bit more work to resolve so Ill jump back on in a few days to update with her (Yup a female Fire Eater) and ill add a group shot when I do. Till then have fun and make cool stuff!

Top notch conversions! Also I doubt you will ever have problems using them even at events. They are more than 50% PP parts and have the right weapons

Thanks LuckGod - yeah that's really the aim - I am certainly going to push the envelope a little but I am always keeping my eye on making sure it is still fair for my opponents.