DUSTing away the cobwebs on this site.....

So... yeah I know I have been absentee in most of November but with good reason - I have a new baby girl coming in a few days. That being said - I will not be ignoring y'all over the next while as I have actually  partially written a pile of new articles, reviews, tutorials, bat reps etc. and even finished (or part finished) new models and minis to share! So good stuff en route.

First amongst these is a new shipment of stuff from the fine folks at Meeplemart (AN AMAZING ONLINE + REAL STORE DISCOUNT RETAILER) located in Toronto Canada.  This place is a  pleasure to deal with and offers flat rate $10 shipping in Canada. Sweet!

Here is what I got: 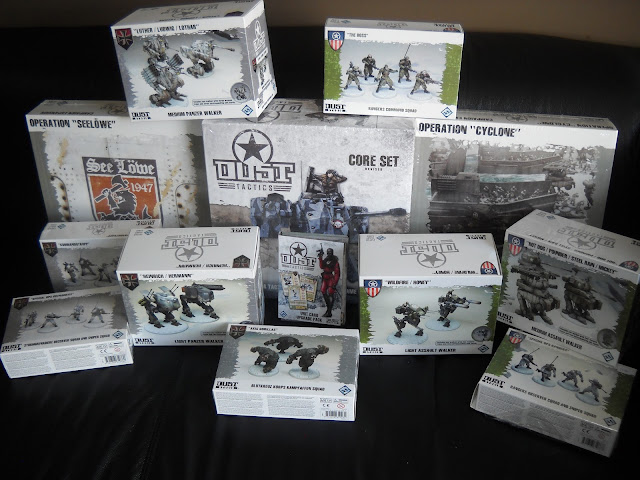 
For any who arent aware of it yet - this game is DUST: Tactics and is an alternate WW2 setting miniatures boardgame produced by Fantasy Flight based on design work by the incredible Paolo Parente. The even better part of all of this is that the original 40K overfiend himself ANDY CHAMBERS has written the ruleset to expand the game beyond its beer and pretzel board bound experience (which is great and has been so wonderfully developed with expansions etc. but is still at its heart a boardgame) into a full fledged unbound miniatures system  called DUST: Warfare which should be released in the next couple of months!

Alien tech, robot walkers, 1/48 scale compatable, Nazi Zombies, Cyborg Apes - what isnt to love!!!!
I have actually been preparing a few things for this since the first conformation that it was being developed and I will have more on that to come soon ;)

Cya next week with some Warmachine updates!!!
Posted by TKKultist at 12:04 am

Congrats on the new addition to the family! I played tested Dust: Warfare for Andy and I had allot of fun with it.