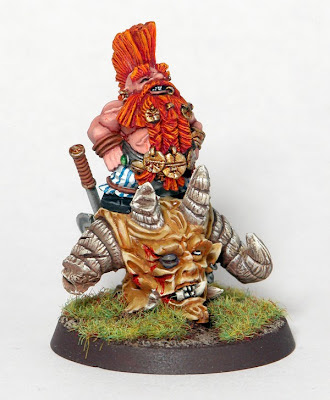 As reported "Paul of the Man Cave" has won the LITW@200 contest!

For his prize he has chosen the Games Day Limited Edition Dwarf Slayer. Here is an example of this figure painted by monkeyboy30672 on CMON:

A sealed MIB version of this will be making the great trip down under where he is reportedly going to be drafted as the coach and turn counter for The Man Cave's new dwarven Blood Bowl team!


As an added bonus for Paul (and because the AUSBOWL community to which he belongs has been so helpful to me in the past) I am also sending along a bonus prize! He will be receiving a custom set of Bloodbowl dice that were originally made for my league and club "The Lost".

Thanks to all who have supported this site and especially to those who continue to follow my hobby ramblings. See ya as usual on Thursday with a new post!
Posted by TKKultist at 2:22 pm