SO, Here we go again! Model building in 2015 is starting to take shape for me mentally and the plans are flowing faster than I can possibly build - but hey that's half the fun right? I have a few specific goals this year:

1. Return to Gencon, Compete P3 again. - Last night I started planning out my diorama entry for the P3 masters. It is an idea I started collecting models for nearly 2 years ago and which has been rolling around for me mentally and I think is now at the point where I can start actively building. My main challenge was in choosing an antagonist for the scene that would carry the visual and conceptual weight of the scene and give the most appropriate contrast in design colour, style etc.  - While im not going to give away the whole thing yet it came down to either Magus or Aurora and I think I have finally settled on Magnus.   Which means my planned Aurora MAY be my single fig entry in the same competition should there be enough time to do her justice. I will also be entering parts of my trollblood army for the opportunity to show them off (my Rhulic/Gorten battlegroup took a bronze this year straight out of my figure case)

2. TRY to compete a major sculpting project that I have been picking away at for years to enter in the MASSIVE VOODOO BANANALICIOUS COMPETITION. I avoided finishing this one for games day because in the early stages of its development my good friend Joe Orteza had a hand in the making of it as well - so it was really ineligible for GW's events. That being said MV is welcoming combined efforts as long as the artists are properly credited - so here is to hoping I get this done! 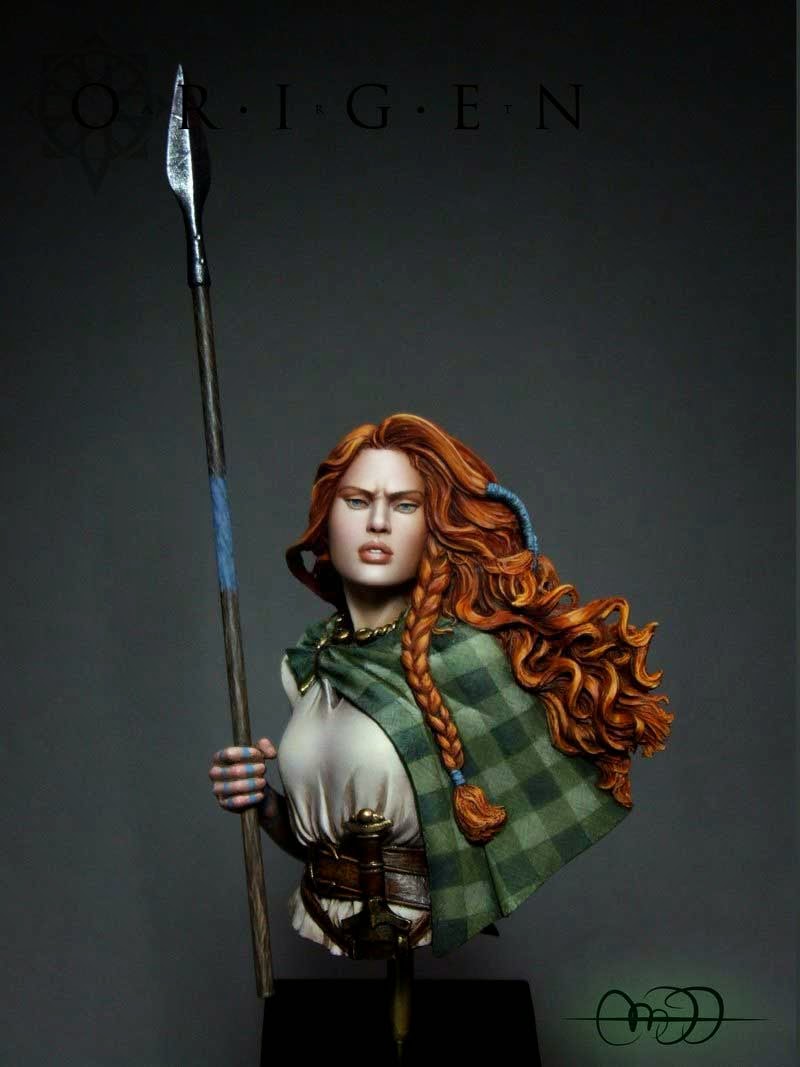 3. Completing my first painted bust - I actually have two coming in the mail any day now - one is the Beautiful bust of Celtic Queen Boudica by Origen Art that I won in the Painting Buddha Treasure Hunt. The one above was painted by the incredible Pepa Sadiva - I can only hope that mine turns out fractionally as nice.  I am really thinking about doing it with my own family tartan as well.... 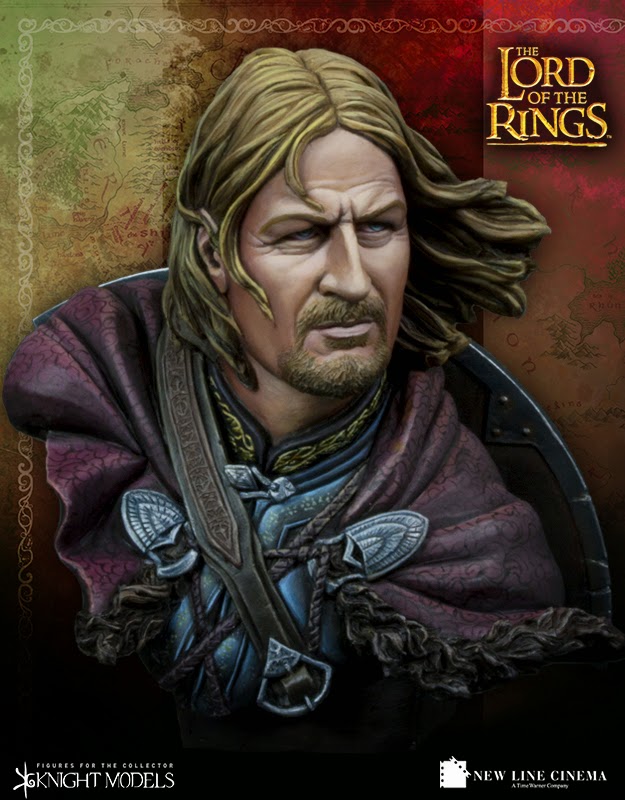 My other bust - the one that I will probably attempt first - is Knight Models' Boromir. A couple years ago I started to prepare my own sculpted bust of Boromir, but when I saw this one I stopped - there was little point as this one is so good. Boromir has always been my favorite character from LOTR and having Sharpe's Sean Bean play him in the films was a fantasticly cool choice. I would like to finish this for the large category in the GenCon painting competition. I have the plinth already (made several years ago by Wayne of Waynes bases for the first planned bust) and I am thinking about trying for a paint job that plays on the duality of Boromir's character - having one side of the face warmer and the other side cooler suggesting the influence of the ring working upon him. A little ambitious for a first try? Perhaps - but I have everything to gain in the experience and nothing to lose but my own mind! That and I was picking the brains of Ben Komets on some ideas (if you aren't familiar with his work get out from under a rock and google him or better yet go check out the tutorials at Painting Buddha!!!)

4. Return to one of my true painting loves - my Beastmen. I have a bunch of models ready to go - but between the move and second child and all the things that dragged me away from doing much hobby wise over much of the last couple years, they have sat patiently waiting for me to return. Most specifically and importantly I started a project "with a little help from my friends" which I am embarrassed to say has sat for far too long without moving forward. Several of my incredible friends have made models to add to my Beastmen collection and have been more than patient waiting for me to paint them off and show them off - Dragomir, Brice Cocanour, PPC, Todd Swanson, Kirill Zhilkov, and Mike Butcher are amongst those who shared their precious time and talents with me to do something really cool.  It is high past time I made this happen and am looking forward to this like you wouldn't believe (take a look at that list - who in this hobby wouldn't be excited to paint miniatures by such great creative minds!?!)
5. WW1 is the theme of my local IPMS group's yearly build challenge. I want to make something cool. Havent got a clue as to what yet - but I am going to show up with something solid. Any suggestions?

6. Build more of my trolls. Hard to play with them if they haven't been build 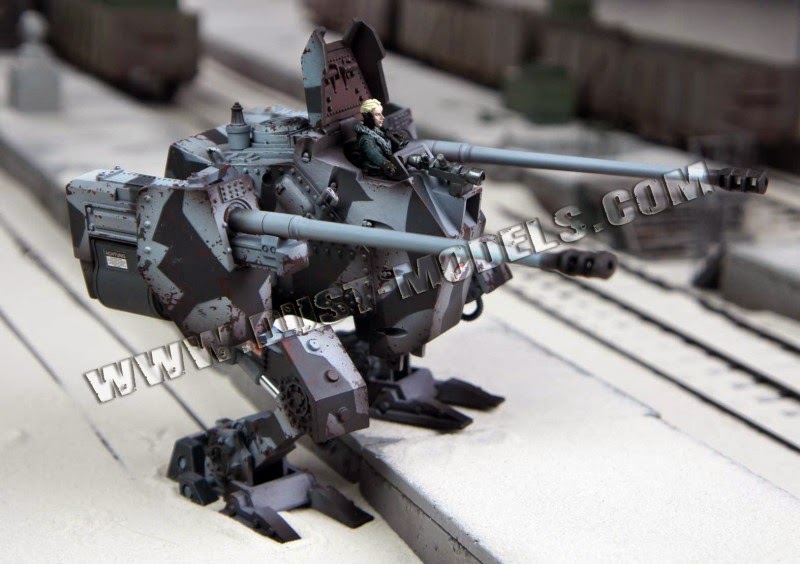 8. DUST - My kickstarter pledge has started to arrive, I want to build and paint more of this stuff.
Moreso, I want to finish a couple of pieces that I started a long time ago - a 1/35 DUST Tina Baumann who needs only a bit of detailing  (perhaps even in time for the 31st January deadline for the DUST 46/IMCO competition) and a 1/35 Jagdluther (HUGE resin kit - metal barrels, etch all the goodies - reposed and painted in a Kursk Camo scheme......drooling just thinking about this piece in my cabinet and maybe - unlikely but maybe - in the GenCon Machinery of Destruction Category) Mind you this was on my to do list for last year so...... we shall see. 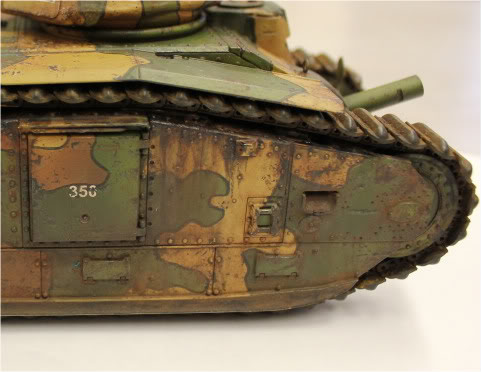 9. Finally finish my basing for the beautiful - and I believe genuinely competition ready - B1 Bis model I built.  Hopefully taking it to the Hamilton Model show in a month or so, if not to one of the shows next fall. Yes this was on last year's to do list as well....

10.Kind of a long shot - most likely a 2015 start 2016 finish. I have been thinking for a while now of making a kitbashed ww2 aircraft to drag racer conversion. A modeler named Marcel Du Long whose work I admire has been making some stuff like this: 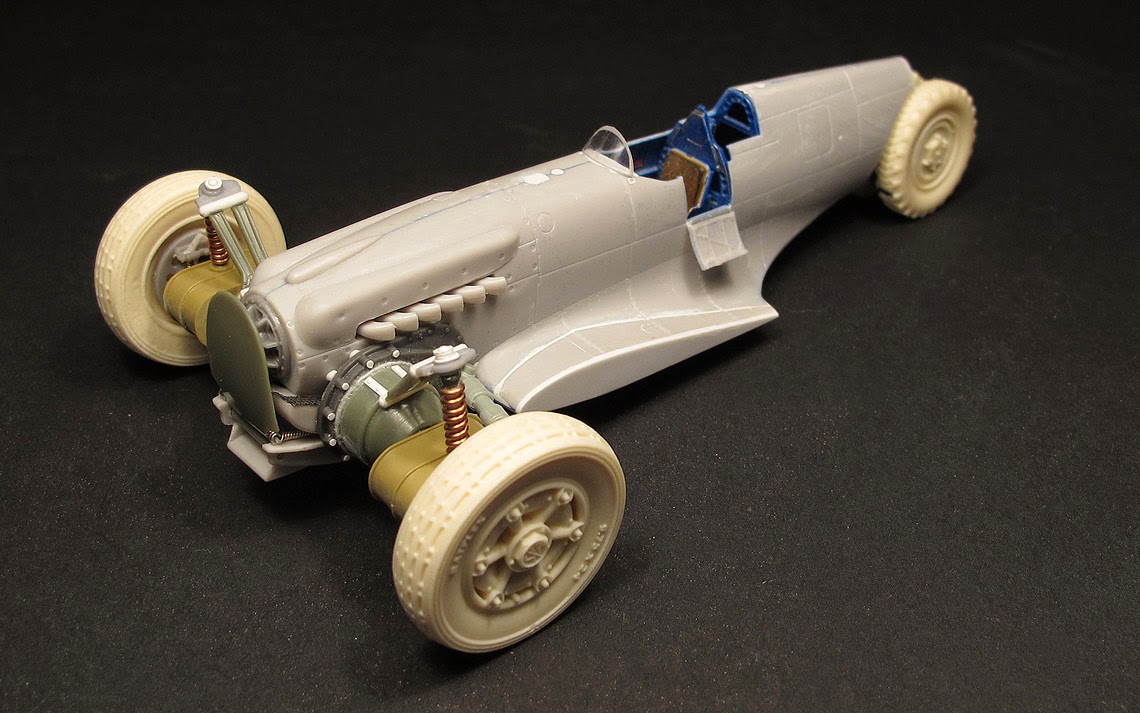 I have been thinking about some similar pieces for a while now and am beginning to gather materials......

11. Did I mention I want to do some trollbloods? Hmm better finalize a paint scheme in order to do so.... ugh.

So that the long range plan for 2015. I look forward to looking backward and seeing how/what comes of this!

See you next week with some finished models and build details!http://www.dustgame.com/index.php
Posted by TKKultist at 8:01 am