Play it Painted 1: Cygnar in a week

So as many of my readers know, I supervise a games club for local kids with board games (like Zombies Keep Out!), card games (like BANG! - ONE OF THE BEST GAMES I HAVE EVER PLAYED!) and miniature based games (like Super Dungeon Explore and DUST:Tactics)  and regular leagues for my favorite miniature game(s) Warmachine/Hordes aka "WARMAHORDES!"

I find that it is the miniatures games that bring in the most kids and the most attention. Seeing cool tables full of beautiful scenery and cool armies really appeals. I collect starter forces wherever I can get a good deal and have used my promotional support from Privateer Press' Press Ganger program to ensure that all kids interested can get a start in this game/community regardless of financial standing or ability to collect their own forces. That being said, many of the students have indeed, purchased their own models to supplement the ones that I have so that they can tool up the club forces and/or build their own preferred forces over time! It has been pretty awesome to see the growth and interest in this hobby through the eyes of these kids.  One now has a Cephalyx army in progress, another Cryx, 2 student owned khador forces, 1 menoth, 1 legion and one circle are all now in the works!
As they paint up their models I will be featuring many of them here on the site for all to see.

The trick/problem on my end is that in gathering up enough starter armies for everyone to play it becomes extremely difficult to ensure that everyone has some nicely painted stuff to feel proud to play and to develop a connection to in those first days of trying things out. I have the Khador and Menoth starter box models all painted up (Pictures/articles about doing them HERE, HERE, and HERE ) but now I am looking to find ways to get plently of my other faction forces together and looking good to fuel young imaginations. So I have decided to start "speed painting" a variety of forces that I have - using all the coolest tricks and shortcuts that I have learned over a lifetime of figure painting. The goal is to crate models that, while they wont win me any awards, will look as good or better than the majority of armies seen on gaming tables (remember we are looking to inspire!) and can be done FAST!

Up first are the boys (and girls) in Blue - Cygnar, bastions of humanity, technology, tolerance and civilization in the Iron Kingdoms. While this may be overstating it a little, Cygnar are generally cast in the hero/good guy role - as such I will be painting them in a clean and bright manner with minimal battle damage and a strong colour palette. Inspired by painters like Schnauzerface, I will be tackling these guys mostly with my airbrush followed by a few keen shortcuts to a good looking finish.

From a friend I got a good deal on a trade for some Cygnar, specifically a Morrowan force based around Constance Blaize and precursor knights:
Blaize
1 Full Precursor unit, with UA
Charger light warjack
Lancer light warjack
Captain Jonas Murdoch (character UA)

Murdoch is the real star of this list as he allows Merc units to become full on Cygnar units.  This way, despite the narrow focus of the rest of the army, my students could try out a variety of different unit/playstyles in conjunction with this. They have almost exclusively decided that Ogrun Assault Corps is the unit of choice - giving necessary fire support while also being beefy enough to take a beating. That Murdoch gives them the assault special rule just makes them a beautiful place to park some list points and terrify opponents..... I hope to add an additional caster and unit (long rifles or stormblades perhaps) to this sometime during the coming year and I already have a firefly and hopefully a couple heavy jacks coming from a friend in the near future. I also have some Gun Mages in my merc. collection that help round out the options for the kids.

After cleaning the models up, I hit them with a chaos black primer from below followed by light Grey Primer from AMMO of Mig Jimenez  (This stuff goes on thin and beautiful) and finally a spray of VMC Foundation white across all upper surfaces to create basic highlights and shadows on the models.

After this I cracked open my Badger Freak Flex Tints (basically the same thing as the Ghost Tints that Schnauzerface and Mathieu Fontaine have been singing the praises of for some time now but in an older packaging line)  I used teal and blue to blend in some simple layers of a transparent colour over top of the preshaded primer coats.


The result is a great series of colour transitions that are rich enough to pop and which blend into my desired apex white colours in various areas. Look at these (admittedly crappy) phone pics to see what results are possible with this method and try to tell me that it isn't pretty darn cool.

﻿
Here is one with the shield attatched, skin tone was given a wash, weapon and armour each with one dry brush and washed with the same AMMO of Mig tracks wash that I washed the skin with.

Here is a small selection of the final washed and highlighted  pieces - completed over my lunch hour in less than 2 weeks (16 figures in about 7 lunches/probably 5 hours total including basing): 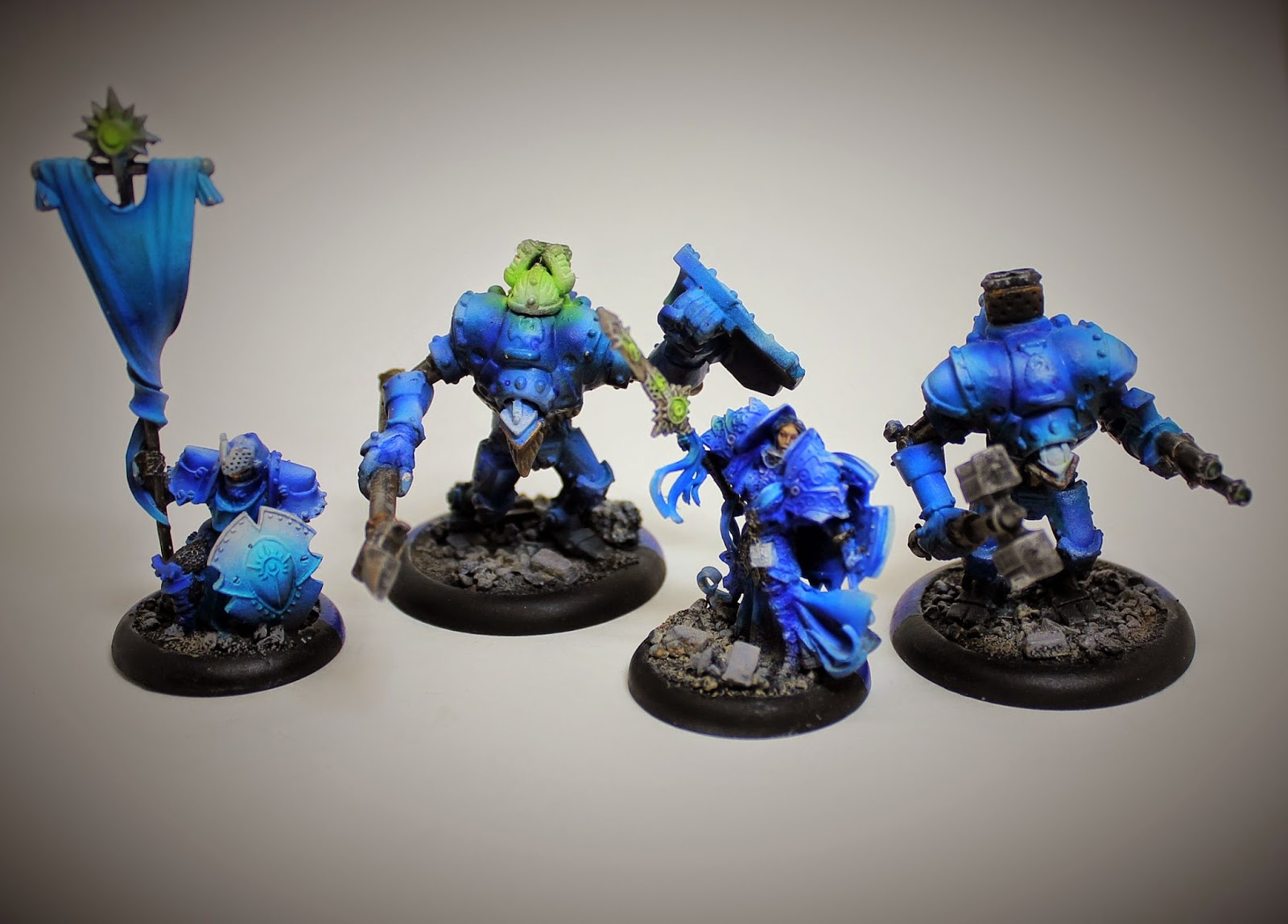 A great little force for the students to throw down with! I have also ordered the trencher master gunner solo to use with season two of the Riven Bonds campaign and I hope to expand it soon with another caster and a unit (preferably a shooting one - probably long gunners and/or black 13th for character!) If anyone out there has good suggestions please let me know :)