Horthol - one of the most Bad @$$ solos in Hordes. He is a Toughalow riding, line breaking, Elite Cadre inspiring, PS15, presumably 1 inch reaching KD/Slam Machine!

Further, He is a well sculpted and characterful model. Great face, upgraded Toughalow armour, Upgraded leg armour, Big spikey shoulder, bigger shield, unique hammer, basically ALL THE THINGS I WANTED ON MY REGULAR LONGRIDERS....... And yet...... 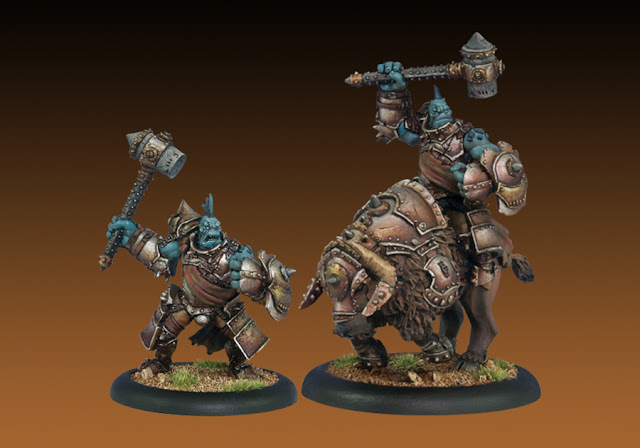 He still just doesn't quite do it for me. Horthol is still pretty tiny especially that lovely detailed face.. The shield sits really funny and far back on his arm....and while better than the other ones it still looks like more hinderance than actual protection.... and when dismounted he shows the trait well known amongst the uber muscled trolls - skinny legs. (C'mon man ya cant be skipping leg day!)

So I decided that with my beefing up of the other long riders - Horthol needed a significant makeover himself!

I started by chopping up the dismounted model - carefully keeping the hammer and spiked shoulder pad that is unique to this model. I took this and added it to a warders body instead. The large model merged easily with the big hammer and looked as though it could legitimately swing it one handed. It also had the requisite leg armour that Horthol should have.

Furthermore, in keeping with the big warder shields I had added to my longriders, I chose the awesome warder champion shield for Horthol and tracked down a second one so that both mounted and dismounted versions would match. (Special thanks to my good buddy Jason Matheson for hooking me up with a second one of these from his bitz box!!!!). Finally I dry fitted one of Dozer's knee pads as shoulder armour to make him even a little more beefy and broad looking - and it was perfect!

When looking at the models - especially the walking one, I realized that I had made things a wee bit more difficult on myself as the standard Horthol Head was going to look tooo small on the warder body and a warder head was way too big for the mounted Horthol body...... So digging through my box of bits I had ordered from PP I came across the head of Horthol's buddy Borka.

This face has a TONNE of attitude and was just the right size that it could fit both torsos without looking weird and out of place on one or the other. It did mean making the mounted one a new neck of greenstuff and a pin while the warder body needed both a neck and an armoured neck gorget, which I made out of plastic tubing.

A little fitting and detailing with kegs and bits later and Voila! A MUCH more satisfying solo who looks ready to smash face on or off his toughalow!

I am REALLY happy with this conversion and cant wait to field him in Mk3 - I think he and his crew will be fun to run with Jarl and the Fennblades, maybe Frank my bomber and a couple others to make a fast list with hitting power! Or perhaps with Borka, though now that he has Borka's face I may have to convert my Borka up too..... :P   Only a couple more weeks until we find out how MK3 is going to shake out!

Cya Soon!
James "TKKultist" Craig
Posted by TKKultist at 10:00 am