A few thoughts on a day of great pride.... 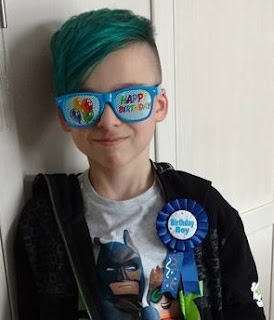 Tonight a new threat will be unleashed on the world of Immoren....

My incredible boy turns 9 today and this is the first birthday where he will be receiving miniatures from his dad :)  A few weeks back, he approached me telling me with great seriousness that he had been working VERY hard on his reading and math. He hoped this would convince me to agree that he was finally ready to learn and try miniature gaming!

He is a genuinely excellent reader, has indeed been working on his math - something which I think the dice and gaming system will only help further!

So Yes. With genuine tears in my eyes I gave him a hug and we got started!

Once we had determined that yes I was indeed willing to support him in this, I went to the books and let him flip through. Unsurprisingly to anyone who knows him, the cyborg steam punk undead legions of Cryx are far and away his choice of army! (Followed by cephalyx and legion).
Specifically He saw Denny3 and the mechanithralls. He turned to me wide eyed and asked "Are these BOTH in the SAME ARMY!!!!!?" And that was that! (Oh and he REALLY wants the Battle engine too.....

Tonight he will open a box of mechanithralls along with a Cryx plushy to take with him to bed - he is still young enough to really appreciate that! - and we have dug through my own collection to see what I already have.

Turns out it was a few things!

I had a the 2 player starter box - so Agathia, Slayer, unit of banes, Reaper, & Deathripper. I also have Deneghra,a Skarlock, 3 or 4 more bone jacks,  Deathjack, Aikos 1, a pistol wraith, Skarre2, Cankerworm and an old metal slayer that I bought during mark 1 but never built or played!

Working it through The plan is to build his first list as:


Some big mean scary robots and a bunch of undead recursion. He is going to have some great fun!
Still a few things we will have to pick up (the Ua, the Skarlock Commander and the necrosurgeon)  but this should become a good base list to learn with. He will also have a few things (like Aikos1, full mechanithrall unit) that he can sub in/out to try as he becomes familiar with the game play.

Next things after the base army - we will likely be looking to Denny3 (maybe as a christmas present) and likely Asphyxious (2 or 3?). If any of my readers are Cryx players and want to chime in on list suggestions we will be happy to hear them - although he has little interest right now in Satyxis despite how good they are in the meta.

William Hungerford Kris Aubin James Nelson Arbuthnot thank you for your inspiration and continuing support with this game. I loved it before and I think I'm going to love it more than ever now!
Agatha Dobosz might need to show him your force and pick your brain for tips

:)
And most especially to his mother Lisa - for supporting me in this hobby for all these years, allowing me to indulge in tournaments, competitions and to build my own hobby room in the house.... Without your support I'd never have progressed as far as I have in this nor would I have had such an awesome chance to inspire and share this hobby with our beautiful son

Today is the start of something really special. Today is a great day.

Craig, tell your son Happy Birthday for me! It is cool that he wants to share wargaming with you!

Thankyou Kirill my friend! I told him and he was thrilled that one of my friends from the internet would be so kind.

Good job getting the son interested in painting! an excellent investment :-)